Sona Kamat, MD, FACR is the founder and CEO of West County Rheumatology. After completing a fellowship at Saint Louis University, she stayed on as an Assistant Professor in the Department of Rheumatology. Dr. Kamat holds appointments at both Washington University School of Medicine and Saint Louis University. She is a sought after speaker who has lectured throughout the United States. She serves on the Enterprise Bank Medical Board and is a former President of the Saint Louis Rheumatology Society. She is married with three sons and resides in West Saint Louis County. Dr. Kamat feels fortunate to have dedicated her career to serving those with arthritis and rheumatic disease.

Join Dr. Kamat and her team, West County Rheumatology, in the fight against arthritis. Regsiter or donate today! 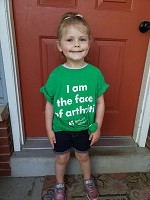 Juliet's family really didn't know what was in store for her until she was 18 months old. She struggled to crawl and walk. One morning she woke up with a swollen knee. They took her to Cardinal Glennon for x-rays and blood work. After draining her knee, tests confirmed juvenile idiopathic arthritis (JIA). She is currently battling a liver sensitivity, uveitis and symptoms of glaucoma. This is just an example of the lifelong complications of arthritis. Juliet is only 5 and has been through so much. Her parents are so proud of her. She is their brave arthritis warrior and the reason they fight.

Join Juliet and her team, Juliet's Joint Warriors, in the fight against arthritis. Regsiter or donate today!