Dr. Lockwood’s approach to chiropractic care is based on the idea that he and the patient work as a team. He provides specialized chiropractic techniques and teaches each client customized exercises they can do at home between visits. The exercises mimic natural movement, which is important for reinforcing realistic motions and help speed the healing process. Patients that take ownership and follow through with their prescribed exercise homework have shown profound change and faster recovery times.

Join Dr. Lockwood in the fight against arthritis, register or donate today! 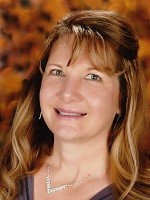 Lynne thought she knew arthritis. From a young age she remembers the aspirin commercials for elderly people rubbing their hands and taking aspirin for arthritis pain. She thought arthritis was the decaying of joints from a lifetime of wear. What a paradigm shift at 50 years old to hear the rheumatologist announce she had psoriatic arthritis. It was not only affecting her joints but was an autoimmune disease that was affecting her entire body. Arthritis has a new definition to her now.

Two years ago, she noticed her fingers had painless bumps on the distal joints. “Maybe I have some kind of virus,” she thought. This began her journey with arthritis, different doctors in search of a diagnosis. The disease had progressed rapidly, and it became clear it was psoriatic arthritis.

Lynne doesn’t believe one can talk about arthritis without mentioning pain. She imagined stiffness, but not the intense, electrical pain that was searing through her joints. She felt like Piranhas had hatched in her body and were gnawing on her joints. In just two short years, the disease has wreaked havoc on her body, spreading to various joints as well as affecting her skin, hair, nails and mouth. After other medications were not effective, she began injections which are helping significantly slow the spread of the disease.

Lynne’s goal is to not be defined by arthritis. She strives to maintain the best quality of life she can with a positive outlook. Her activities/relationships have become valuable to her. She realizes she may not always be able to live the active lifestyle she cherishes. Lynne is thankful for all the arthritis support and research that has transpired over the years and medicines that have been developed to help her live her best life despite the obstacles.

Join Lynne in the fight against arthritis, register or donate today! 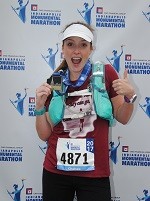 Chelsea’s journey began November 2018. She woke out of a deep sleep with horrible pain radiating from her right hand. White hot pain and bright red skin perplexed her in the middle of the night. As a runner, Chelsea is used to feeling aches and pains that come and go, so she assumed that this would too. The pain spread to her left shoulder then to the right. Lifting her arms became nearly impossible. Small tasks like washing her hair or putting on a shirt felt like climbing a mountain. Chelsea’s knees, ankles and the balls of her feet joined in the pain. Going down the stairs turned into a nightmare. She shares, “one day in particular, I couldn’t peel an orange for my 8-year-old son and crumpled to the floor crying in frustration and fear.”

Blood tests confirmed rheumatoid arthritis (RA) February 2019. She lived in fear of her body as she learned that RA not only means joint pain, but also potential problems with heart, lung, sight and more. It was a dark time in her life. She feels that it’s important to not gloss over that. Greater awareness comes from the realization that this is a disease that isn’t easy to live with and needs funding for research.

Chelsea is thankful for her support system and medical team. The treatment she has had has provided some relief and she is able to bend her thumbs, run a mile and dance with her kids. She says, “I will keep putting one foot in front of the other no matter what each day looks like.” Chelsea’s PNW running friends, the Northwest Renegades, have a great saying: “One day we won’t be able to do this. Today is not that day!”

Join Chelsea in her fight against arthritis, register or donate today!

Kate was a first grader who loved doing cartwheels, handstands and practicing getting them right. Her wrists and knees started hurting. Her parents thought she had injured her wrists. At a doctor visit juvenile arthritis was suggested.

Kate describes her visit to Children’s Hospital as, “scary.” Her doctor diagnosed - juvenile arthritis (JA). After medication, Kate noticed no arthritis symptoms. Kate and her family thought the arthritis was gone. Kate loved being athletic for two years until she started to hurt again. Doing back bends, round offs’, one-handed cartwheels and splits. She injured her knee and after being on crutches, she found out arthritis was present in her joints. Kate learned arthritis can go into remission and then flare up again.

Kate’s third grade year was full of doctor visits: eye exams, blood draws, x-rays, physical therapy, and an MRI on her jaw. The tests were painful holding her joints in awkward positions for x-rays, she hated needles, dreaded the blood draws which left her light-headed. Her arthritis was also conjunction with enthesitis, TMJ, and hypermobility.

The following year was difficult as the arthritis progressed through her body: wrists, toes, ankles, knees, elbows, jaw, hips, fingers, and shoulders. She quit doing cartwheels, running, riding her bike, long walks and participating in P.E. class. Her family shortened hikes/walks otherwise she would often end up limping and holding on to her parents.

She’s on her sixth medicine, moving from pills to shots every two weeks. Each change trying to stop her medicine-induced nausea and inflammation in her joints. Kate says, “I am hopeful that someday the right medicine will feel good in my stomach and stop my arthritis. Until then, I am grateful to tell my story for the Arthritis Foundation to fight against JA and help others who suffer like I do.”

Join Kate in the fight against arthritis, register or donate today!